Katy coach Gary Joseph paid tribute to district officials who worked to keep the season going amid the coronavirus pandemic.

“It’s the whole thing, its not just Katy football, it’s the drill team, the band, everybody got to sit there and enjoy it and be a part of it,” Joseph told Fox Sports Southwest. “I’m so proud of Katy.”

Katy finishes with a 14-1 record. Cedar Hill finishes at 12-2 and was making its first state title appearance since 2014, when it defeated Katy. 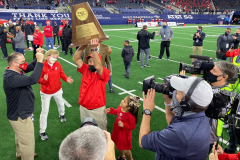 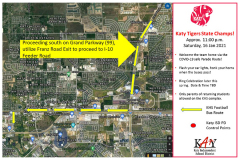 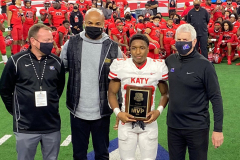 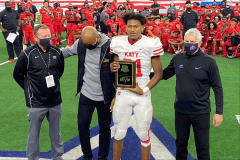 The public is invited to a coronavirus-safe welcome home parade set for approximately 11 p.m. tonight.

The football team, along with the band, cheerleaders, and drill team, expect to return by bus at approximately 11 p.m. tonight. They will travel south along the Grand Parkway, exiting at Franz Road to take the Grand Parkway access road south to the Interstate 10 intersection. From there, the parade will head west along the Interstate 10 access road, exiting at Highway Blvd., where it will proceed to the high school at 6331 Highway Blvd.

Fans are invited to flash their lights and honk their horns as the students return from Arlington. Only parents of Katy High School students will be permitted on the campus.

The Tigers led from the start in posting Saturday’s win, and it was all the more satisfying because the offense, defense, and special teams put points on the scoreboard.

Katy’s first score came on a 37-yard pass play from sophomore quarterback Caleb Koger to senior Taylor Stansberry with 1:18 remaining in the first quarter. On the ensuing possession, Cedar Falls senior quarterback Kaidon Salter threw an interception to senior linebacker Shepherd Bowling, and the Tigers took over at the Longhorn 41. Three plays later, senior running back Jalen Davis scored from three yards out, and the rout was on.

Katy added a 48-yard field goal by senior kicker Nemanja Lazic and a 55-yard run by junior running back Isaiah Smith to close out the first-half scoring. Lazic’s field goal ties the record set by Katy’s Kris Perez in 2015 against Lake Travis.

After Lazic made a 21-yard field goal midway through the third quarter, the Tiger defense got into the scoring act. On the ensuing possession, junior defensive back Hamilton McMartin recovered a fumble and returned it 54 yards to give Katy a 34-0 lead.

Salter rushed for both of Cedar Hill’s touchdowns in the third quarter. He scored on runs of four and 10 yards. Lazic made his third field goal, from 28 yards, between those Longhorn scores.

Katy sophomore running back Seth Davis scored on a 25-yard run early in the fourth quarter. And on the ensuing possession, Katy senior defensive lineman Cal Varner intercepted and returned a Longhorn pass for a 15-yard touchdown.