After the Tigers won their seventh state championship, Union Pacific Railroad was generous enough to send in “The Katy” for a photo session with the team, band, brigade and cheerleaders.

This gallery represents some of the fantastic images that were on captured that cloudy day in the Spring of 2013. 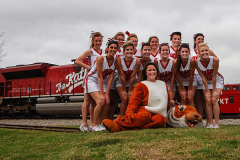 History of ‘The Katy’

Omaha, Neb., September 20, 2005 – Union Pacific has introduced the latest addition to its Heritage Series locomotives – the Katy locomotive. Incorporating historic colors and graphic elements of the Missouri-Kansas-Texas Railroad, the new locomotive pays tribute to the men and women of the Katy.

“Our reputation as America’s greatest railroad has been strengthened by the many lines that are now a part of the UP,” said Dick Davidson, chairman and CEO. “The creation of our Heritage Series is just one way we can pay homage to those railroads and the generations of men and women who helped to build a great nation and the foundation for our future.”

The Missouri-Kansas-Texas Railroad, affectionately referred to as the Katy, was created in 1865. By the time it joined Union Pacific in 1988, the Katy served six midwestern states with more than 3,377 miles of track. It was an important north-south link between the Midwest and Texas, especially for the growing coal business. The Katy had primary operating centers in Denison, Texas; Bellmead, Texas; and Parsons, Kan.; and was headquartered in Dallas.

The new Katy Heritage Series locomotive is numbered 1988 to reflect the year its namesake joined Union Pacific, and the locomotive will initially operate within territory served by the Katy.

The Heritage Series marks the fifth time in company history that Union Pacific has painted locomotives in colors other than the traditional UP “Armour Yellow” paint scheme. Previously, locomotives were custom painted in 1991 to honor UP employees serving in the Persian Gulf War, in 1994 to call attention to the United Way Campaign, in 1996 for the Atlanta Games Olympic Torch Relay Train, and in 2002 for the Salt Lake City Games Olympic Torch Relay Train.